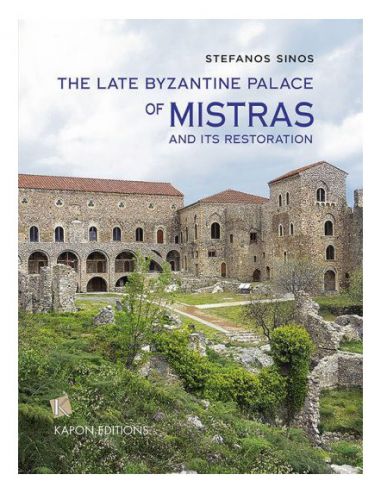 The late Byzantine Palace of Mistras and its restoration

A long time ago, three high-school boys decided to travel from Athens to Sparta during the 1954 Christmas Holidays, in order to visit the archaeological site of Mistras. At that time, I had already decided to study architecture, and I was especially interested in the ancient and medieval monuments of my country. So, in a courageous and meaningful move, I stood in front of the extensively restored eastern portico of the Palace to be photographed by my friend and class-mate Panaghis Vourloumis, who later became a distinguished economist and banker.
That was the first time that I beheld the ruin of the Byzantine Palace of Mistras. I understood then that the monument had undergone large-scale restoration interventions, but did not know exactly when and by whom they had been realised. I felt then for the first time that it was a pity that these earlier attempts had not been brought to completion, so that the Palace could be accessible and understandable in its complete form, and that its gradual decay could be halted, to a great degree. Later, when I visited the site again after completing my studies, I realised that the monument should be re-investigated: not only for its history but also because its particular forms and their importance for the general documentation of the last period of the Byzantine Empire and the Despotate of Mistras had not yet been brought to light in all their details. [...]