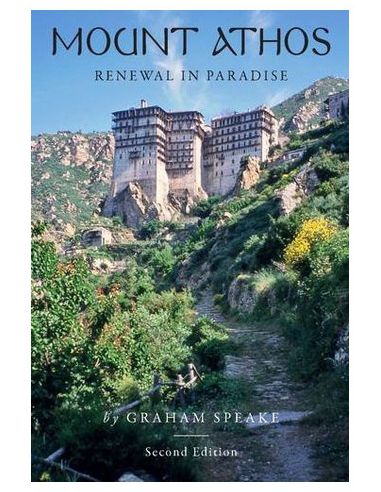 In this second edition of his acclaimed study of Mount Athos (for which he was awarded the 2002 Criticos Prize) the author takes the opportunity to revise and update his text and also to add a completely new chapter documenting the changes that have occurred in the twelve years since its first publication. The renewal that took place in the last quarter of the twentieth century can now be seen in its historical context and has been succeeded by a period of spiritual and cultural maturity. Not for the first time, in a world beset by political upheaval and economic turmoil, the Mountain stands as a symbol of continuity and stability, a spiritual powerhouse offering refreshment to all who turn to it.

This is a history of Mount Athos from pagan antiquity to the present day. It tells the story of the first monks who were hermits, living in caves and simple huts, often in the most inaccessible parts of the peninsula. The first monasteries were founded in the tenth century with support from the Byzantine emperors. Both traditions survive on Athos today, the anchorites in their desert cells and the monks in the twenty ruling monasteries, coexisting more or less happily as they have always done.

The book describes the effects on the Mountain of political events in the outside world—the Latin conquest, Ottoman rule, the Greek War of Independence, two world wars, and the incorporation of Greece into the European Union—and how little the monks’ way of life was changed by them. Far more important for them were the religious movements and controversies that often divided the Mountain and demonstrated its spiritual influence over the Orthodox world.

What emerges at the end is a portrait of the Holy Mountain today that despite all the storms created by political change, economic crisis, and religious controversy (not least in the last twelve years) is still recognizable as fundamentally the same monastic preserve that welcomed the first monks and hermits more than a thousand years ago.