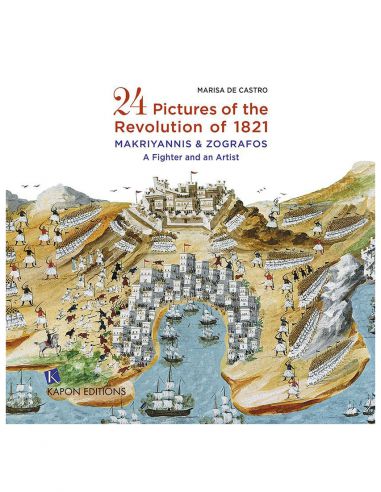 24 Pictures of the Revolution of 1821. Makriyannis and Zografos. A fighter and an artist

Twenty-four imaginary dialogues that will take children and young adults through a charming journey of knowledge into the world of the pictures of General Ioannis Makriyannis. The award-winning book explores in a unique way the twenty-four colorful paintings that were created by the folk painter Dimitrios Zografos under the guidance of General Makriyannis, and narrate events of the Greek Revolution from its beginnings in 1821 through to 1830 when Greece won its independence. By highlighting the rich details in each painting, the dialogues will reveal to the reader several major as well as lesser-known aspects of the Revolution and its era not to be found in history books.

24 paintings narrating events of the Greek Revolution of 1821, from its beginning until the foundation of the Greek state in 1827, are being explored in this new, lavishly illustrated edition. These are the paintings presented by the distinguished fighter of the Revolution, General Ioannis Makriyannis, to the first King of Greece, Otto, and to the rulers of the Great Forces which supported the Greek struggle for independence. The paintings are the work of the folk artist and comrade in arms of General Makriyannis Dimitris Zografos, who aspired to immortalize all the major events that happened in the turbulent years that led to independence from the four centuries-long Ottoman rule.

Award winning author of children’s books Mariza Decastro, relying on children’s national curiosity and proneness to observe, and utilizing the rich details of each painting —the persons depicted, the topography of the battles, the sieges, the sea battles, the impressive armαments and dresses, as well as the colors and technique of the artists— stages 24 imaginary dialogues between her and a kid. Through the dialogues, young as well older readers will be guided through a charming decipherment and interpretation of the world of the paintings, and will discover major events of the Revolution of 1821 and its era, together with unknown aspects and details not to be found in history books.